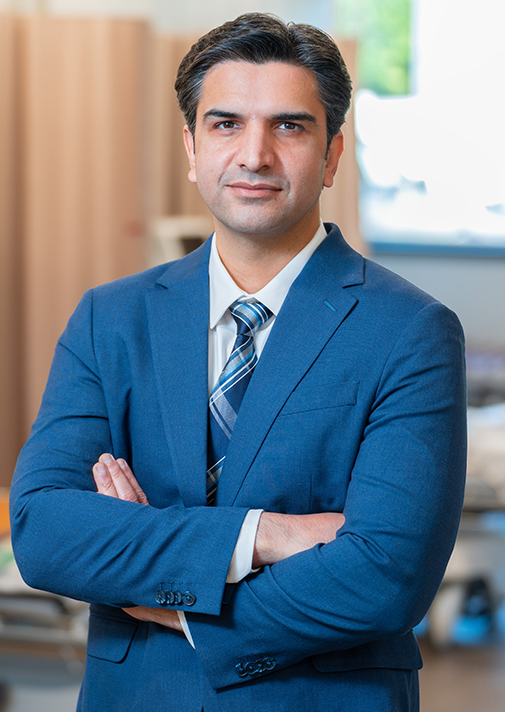 For Dr. Muhammad Sarki, it’s all about “the three Cs.”

“My mentor Dr Karl Weber emphasized those three qualities when I was beginning my career in Cardiology. Be confident. Be compassionate. And be competent. Generally in life, you get either better or worse at what you do. I have the need to make efforts to get better day after day, year after year. It means moving through your comfort zone.”

And that, says Dr. Sarki, is what impresses him about ACV and the team working there alongside him since he came on board in July 2022: “My colleagues are really competent at what they do, and they are always striving to do better. They’re among the best in the country, and always moving in directions that reflect those three Cs.”

Dr. Sarki was born in a town by the name of Quetta Pakistan,  his father and mother still tend to agricultural holdings and a handful of other businesses back in Pakistan. He and his brother and sister learned at an early age the benefits of education, something instilled in them by his parents: “They always put a high value on education, telling us it was one of the most important things in life to become as educated as possible. Give 100%; that’s how we were raised.”

Initially, Dr. Sarki was interested in earning a master’s degree in business, but remembers being drawn more to science in general, and biology especially. “At 13 or 14, I figured out what I really wanted to do, and I was influenced by watching people in my country suffering from minor diseases that should have been treatable. I decided I wanted a career in which I could give back.”

Dr. Sarki attended medical school in Karachi. He then moved to the United States, where he completed his internship and residency at St. Francis Hospital in Evanston, Illinois. From there, he held a cardiology fellowship at the University of Tennessee Health Science Center, followed by a fellowship in interventional cardiology at New York-Presbyterian Brooklyn Methodist Hospital.

He served as a hospitalist and assistant professor of medicine at Medical College of Wisconsin, and as an interventional cardiologist at Ascension All Saints Hospital in Racine, Wisconsin.

While training to become a cardiologist, Dr. Sarki became interested in ACV by following the work being performed by Drs. Saab and Mustapha.  “I was really impressed by their approach and how they do things. It’s very unique, and it’s what drew me to be associated with them. I wanted to hone new skills, and I wanted to learn from these guys particularly.”

He’s impressed with the rapport ACV staff has with patients: “I think that comes with being compassionate,” he says. It’s also important to showcase your skills and competency: “In the end, people will discover whether you’re good; they will know.”

Dr. Sarki also likes the way things are “streamlined” at ACV, noting “It’s a big part of why ACV is such a successful operation. They make the most of everyone on the team, no matter what role you play. A big part of their winning recipe is the efficiency of the practice. There aren’t a lot of roadblocks or hoops patients must go through.”

He, his wife and two children are settling in and his family already have tested vacation spots like Mackinac Island and the Traverse City area. From their home in Ada, they are enjoying outdoor sports as varied as tennis, kayaking, hiking and bicycling.

What does Dr. Sarki hope to impart during his tenure at ACV? “I want people to know that when they come to us for healthcare, they can put their trust into our team. I continually ask myself, ‘Am I worthy of that trust?’ because in order to be worthy, you need to be sincere in all that you do.

“Generally, when I’m making decisions about how to proceed, I see my own loved ones in that role. I try to be compassionate, and that means never treating anyone as a subject or a number. You need to put yourself in their shoes. There’s no room for incompetence.

“At ACV, the doctors and staff really do care, and they make their best efforts day in and day out to be attentive to our patients’ every need.”

Reach out to us today to discuss how we can help you. END_OF_DOCUMENT_TOKEN_TO_BE_REPLACED